TL;DR: Reddit is a data goldmine, Dogecoin is having the last laugh and Brandwatch is key to accessing these insights.

This blog has been introduced in true Reddit fashion. TL;DR stands for “Too Long; Didn’t Read” and is conventionally followed by a short and sweet summary of whatever bit of writing was deemed too long to read. This blog might be a bit more on the lengthy side but I assure you, it’s 100% worth the read.

The True Value of Social: Dogecoin Has the Last Laugh Without influencers… influencing, the world would be a completely different place. A simple tweet from someone influential has the potential to skyrocket the value of a product. One such instance of this happening is when space, car and space-car tycoon, Elon Musk, tweeted about the relatively new cryptocurrency, Dogecoin. His social media posts about the cryptocurrency that was initially just a joke generated a whopping 239k mentions. 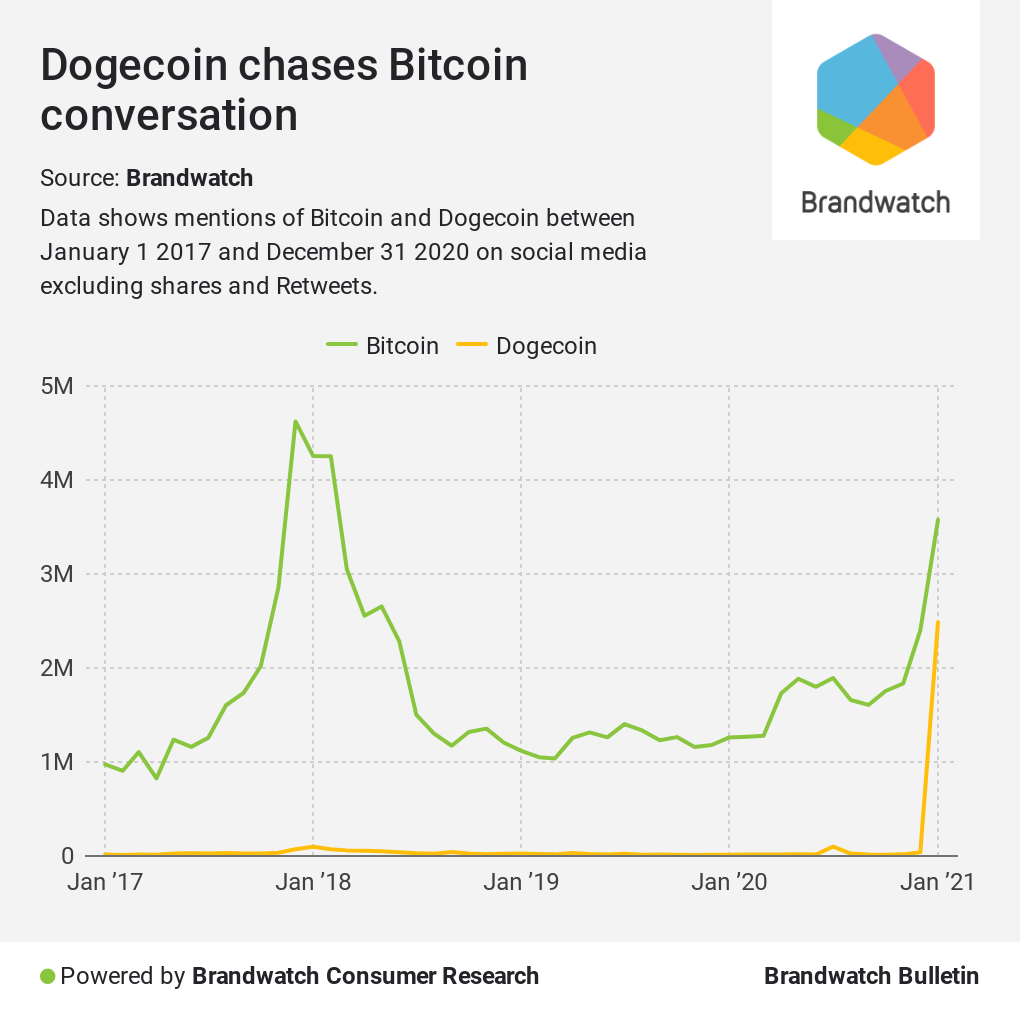 In their article on cryptocurrency, Brandwatch states that mentions of Dogecoin on social media have increased 1,239% in 2020, compared to 2019 with “328k mentions of ‘buy’ and another 176k mentions of ‘hold’ as Dogecoin holders asked their peers to hold off on cashing in.” Dogecoin has risen through the ranks to be on par with other cryptocurrencies like Bitcoin, with the steady increase in Dogecoin conversation almost meeting that of Bitcoin.

In January this year, we saw yet another display of the power of social media when Reddit group, SatoshiStreetBets pushed to get Dogecoin higher so that people make more money. This is not the first of its kind in the world of Reddit. Groups like WallStreetBets have pushed cryptocurrencies like Bitcoin before. In their article, Brandwatch states “Influencers and online communities have huge power over what people invest in” which couldn’t be more true in the case of Dogecoin. A simple post on Reddit could dictate the fate of this unpredictable cryptocurrency.

Reddit: The Data Goldmine With 430 million average monthly users, 50,000 words posted a minute, 2.5 billion upvotes each month and 1.2 billion comments per year, Reddit is an often overlooked, rich source of data. Why do we look over it? Everyone’s anonymous, so what good would that data do? Well, being anonymous encourages members to tell the absolute truth. So if you want an honest, in-depth perception of your brand, Reddit is the place to look.

Wait a second, what is Reddit? Reddit is a forum-based website where people ask questions, post links and comment on and rate posts. The big difference between Reddit and similar sites is that it has a downvote system. A post will be downvoted for several reasons. For example, a post might not be relevant to the subreddit in question. In true Reddit style, it will not be downvoted if a user simply does not agree with what has been said. A Redditor would rather contribute to the conversation in the comment section if they disagree.

There is a tremendous amount of jargon that comes with being a Redditor, a few examples being: karma, AMA (or “Ask Me Anything”) and Reddit Gold. This may sound foreign right now but lucky for us, Brandwatch has compiled a mammoth Reddit guide that teaches us all about it.

How to find the right Reddit data In Brandwatch’s latest webinar, Reddit’s Senior Brand Specialist, Ash Dunn, refers to Reddit as the home of “authentic human connection.” This is a place where people go to confide, complain or compliment and these can all be used to your business’s advantage. Here’s how:

To Reddit or Not to Reddit? As we’ve seen, social media is incredibly powerful. Not only can it dictate the fate of cryptocurrencies but, if certain cards are dealt, also that of entire brands. Having a stronghold on all social platforms where your audience might be talking about you - including the allusive ones like Reddit - will allow you to put your best foot forward and develop a killer brand strategy.